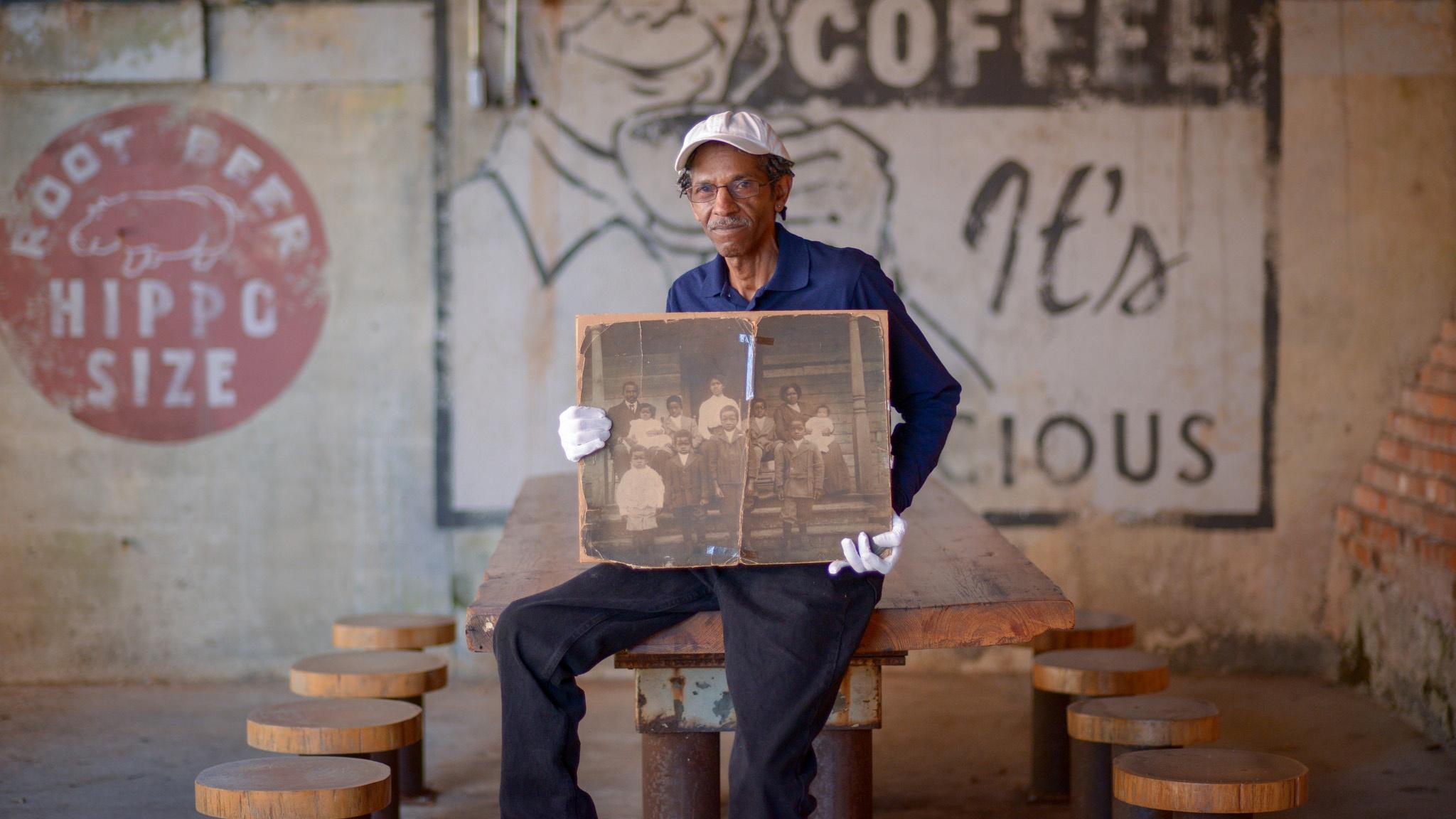 RESEARCH TRIANGLE PARK, NC, August 5, 2019—Every photograph captures a one of a kind story and thanks to Family Pictures USA, those stories can be shared by the people who lived them. Join Thomas Allen Harris, host of the new PBS series Family Pictures USA, on his journey to share stories lost in time by tuning in to UNC-TV, North Carolina’s PBS & More Channel, Monday, August 12, at 9 PM. Starting with North Carolina, Harris seeks to expand local and national history by giving everyday people a chance to tell their stories through family photos—from snapshots to portraits. In the process, firsthand accounts uncover vibrant characters, unite communities, explore decades past and inform our future.

“Like so many of our families, our state’s history is complicated, yet Family Pictures USA creates a compelling way to share connections between the past and now,” explained UNC-TV Director on National Productions Rachel Raney. “The show weaves together our economic story—from being an agricultural powerhouse to today’s hub of high-tech start-ups and established enterprises.”
Directly following the premiere of Family Pictures USA, UNC-TV presents Family Picture North Carolina, at 10 PM. This exclusive special reunites Harris with the people and pictures featured in the national series’ North Carolina episode. Trace the thread of history from the point of view of a cigar-roller and watch Durham grow from tobacco town to diverse destination.

As Raney puts it, “Our local Family Pictures North Carolina program expands on these stories and serves as a testament to our state’s amazing forward thinkers thriving amid an array of perspectives and opportunities.”

Families flocked from across central and eastern North Carolina to share their photos and homespun anecdotes with Harris at Family Pictures USA’s photo sharing events held in both Rocky Mount and Durham. Together, Harris and the families created the Monday, August 12, at 9 PM, Family Pictures USA episode. Just as eagerly, some of the same families joined UNC-TV and Harris in UNC-TV’s Research Triangle Park headquarters before a live studio audience to film the follow up Family Pictures North Carolina, Monday, August 12 at 10 PM, on UNC-TV.

ABOUT FAMILY PICTURES USA
This new three-part PBS series, created and hosted by filmmaker and photographer Thomas Allen Harris, explores American cities, towns and rural communities through the lens of the family photo album, unearthing rich personal stories that expand our understanding of our shared history, diversity and common values. Family photos of everyday milestones—marriage, childhood, a new car, a growing business—provide a visual portal through which to examine the roots, surprising connections and provocative parallels that shed light on our collective past and our shared future. From the streets of Detroit to the shores of Southwest Florida to the farm fields of North Carolina, participants introduce ancestors, parents and old friends—fascinating characters brought to life through a treasure trove of images and stories handed down through generations.

Each episode of Family Pictures USA begins at a community photo-sharing event, where people present images long stored in photo albums or stashed away in dusty boxes. Using these pictures as a starting point, Thomas engages participants in conversation, guiding them through stories of hardship, perseverance and love. The series then goes on location in their communities to expand these family narratives into a deeply personal people’s history of the region.

“For the past 150 years, families have used the photo album to pass on their stories from one generation to the next,” said Harris. “The family album has kept us together. But in today’s digital age, we have to work harder to keep and maintain the stories of our families and our communities. Everyone is a photographer, but the stories and communities behind our photos are being lost. Family Pictures USA strives to keep these stories alive and—by sharing them—remind us of our common roots and strengthen connections with our friends, families and neighbors.”

With an economy founded on tobacco and textiles, North Carolina (Tuesday, August 12, 9 PM) is a historically rural state that is changing rapidly. Through family photos, we learn how tobacco money transformed Durham from a sleepy small town into a prosperous city with a thriving African American middle class and a financial district known as “Black Wall Street.” Outside of Burlington, the Occaneechi Band of the Saponi Nation have repurchased ancestral lands to serve as a legacy for their children and a cultural and educational gathering place for the tribe. Families long separated by race and class are finding healing through recognizing their kinship as black and white descendants from the same ancestors. And a sign of the new North Carolina is found in a church headed by a Korean American pastor whose mission is to help integrate the region’s latest immigrants into the community.

In America’s comeback city, Detroit (Tuesday, August 13, 8 PM), the series introduces descendants of both Native Americans and slaves whose ancestors helped build the city. Thomas visits the oldest hat store in the U.S. and learns about a border wall paid for by the U.S. government that was constructed to separate black and white neighborhoods. One of America’s most prosperous cities in 1960, Detroit’s rise and fall and rise again is revealed through personal photos and stories of the city’s proud inhabitants. The enormous influence of the auto industry, the rise of labor unions, cultural touchstones like the Motown sound, the devastating impacts of the 1967 riots and the city’s renaissance today are all explored via family narratives and memories, expanding our understanding of Detroit and its multilayered story.

Family Pictures USA also visits Fort Myers and the Paradise Coast of Southwest Florida (Tuesday, August 13, 9 PM), a tropical region that stretches from Caloosahatchee River to the Everglades, where Native Americans, cattle ranchers, members of fishing communities and restaurateurs recount their family stories with pride. In rural Immokalee, we learn that Florida is still cattle country and meet former migrant workers who now own the companies that harvest produce. Descendants of Seminole leader Osceola preserve their tribal way of life and pass down centuries-old traditions to their children. An African American family confronts the divisions of the past and moves forward as they uncover the story of their pioneering bi-racial ancestor and meet their white relatives. And in a surprise twist, a couple who successfully saved Estero Bay and formed the state’s first aquatic preserve meet the woman whose father tried to develop it.

Family Pictures USA invites viewers to share their own images and stories, which will be aggregated across social media and posted to the Digital American Family Album.

About Thomas Allen Harris
Thomas Allen Harris is a critically acclaimed, award-winning filmmaker and artist whose work across film, video, photography, and performance illuminates the human condition and the search for identity, family, and spirituality. Graduate of Harvard College and the Whitney Independent Study Program, member of the Academy of Motion Pictures Arts and Sciences, and published writer/curator, Harris lectures widely on the use of media as a tool for social change. Harris is Senior Lecturer at Yale University, jointly appointed in African American Studies and Film and Media, where he teaches courses and curates exhibitions related to Family Pictures USA.

About the Corporation for Public Broadcasting
The Corporation for Public Broadcasting (CPB), a private, nonprofit corporation created by Congress in 1967, is the steward of the federal government’s investment in public broadcasting. It helps support the operations of more than 1,500 locally owned and operated public television and radio stations nationwide. CPB is also the largest single source of funding for research, technology and program development for public radio, television and related online services. For more information, visit cpb.org, follow us on Twitter @CPBmedia, Facebook and LinkedIn and subscribe for other updates.