Baking apples – those that hold their shape when cooked instead of collapsing into soft sauce – are best in this recipe. If you’re shopping at a farm stand or apple orchard, ask the grower for suggestions, especially if they have heirloom varieties that might be unfamiliar, albeit delicious. Popular grocery store varieties that would work well include Honeycrisp, Pink Lady, or Gala.

I think chicken thighs are the tastiest part of the bird and are less likely to turn out dry, but if you prefer breasts, use those with bones and skin for best results. The sizzling golden juices from the roasted chicken flavor the dressing, which turns out tender on the bottom and a bit crunchy on top. Be sure to use crusty bread that won’t dissolve in the pan.

The dried cherries soaked in vinegar acts as a bit of sweet-and-tangy relish that balances the richness of the dish. I usually serve this atop a handful of leafy greens. The warmth gently wilts the greens just enough to make it feel like part of the finished dish, not just a side salad garnish. 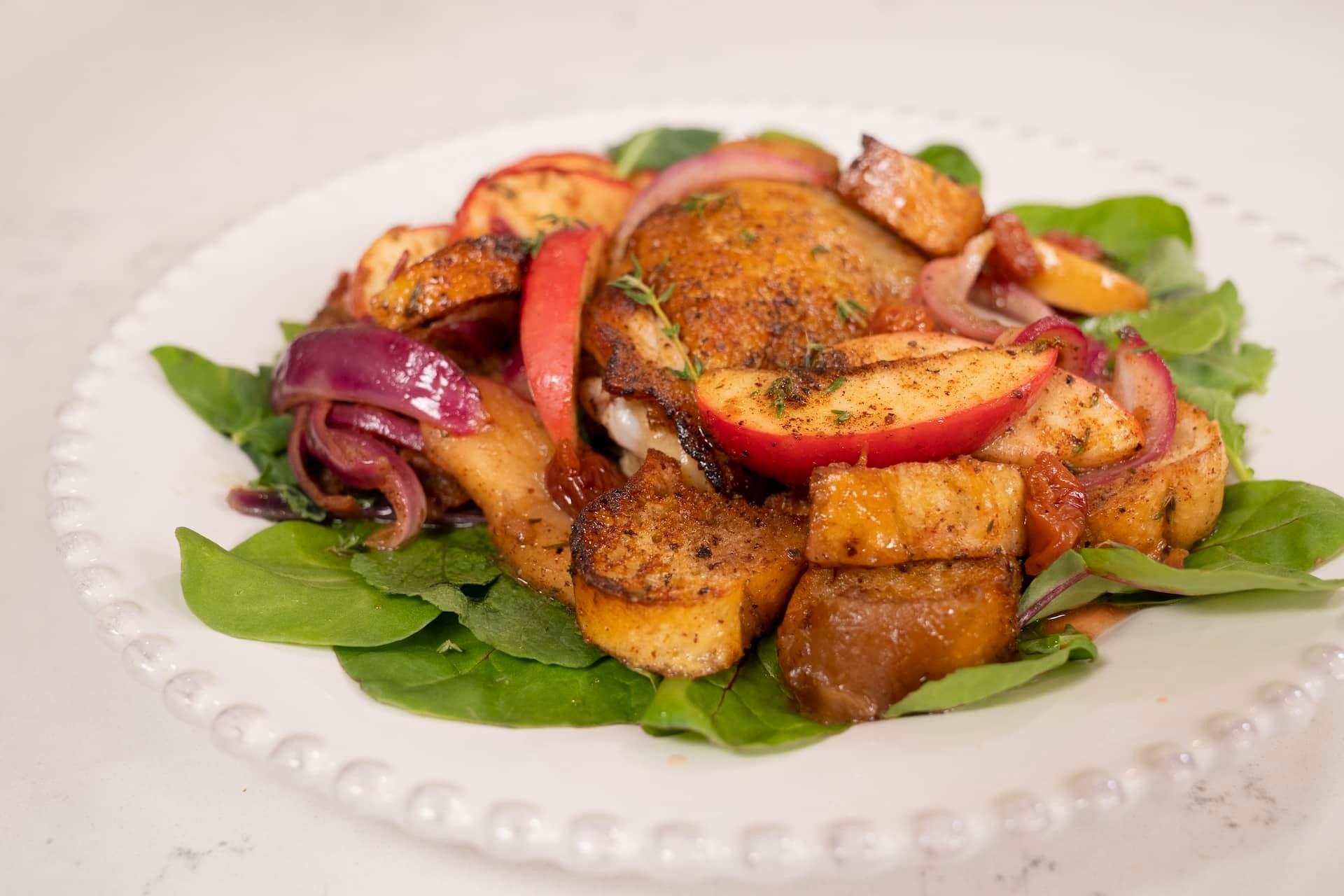 Meanwhile, stir together the brown sugar, thyme, pie spice, mustard, 1/2 teaspoon salt, and 1/2 teaspoon pepper in a large bowl. Add the apples and onion, and stir to coat. Stir in the bread.

Pat the chicken dry. Trim away and discard any excess skin that drapes over the edges, leaving a nice cap of skin over the meaty part. Season on both sides with salt and pepper, a total of about 1 teaspoon of salt and 1/2 teaspoon of pepper.

Heat the butter and oil in a large oven-safe skillet (preferably cast-iron) over medium-high heat. When the butter foams, add the chicken skin-side down, leaving space between the pieces. Cook undisturbed until the skin is crisp and deep golden brown, about 5 minutes. When ready to flip, the chicken will release easily from the pan without pulling or tearing the skin. Flip the chicken and cook the other side for 2 minutes. Transfer the seared chicken to a plate.

Give the bread mixture a good stir to ensure everything is well coasted in the spice mixture, which will have turned a bit sticky from the juices the apples will have released. Add bread mixture to the skillet and stir well to loosen the browned bits and coat the bread in the tasty pan drippings.

Return the chicken to the pan, nesting the pieces into the bread mixture, but leaving the crisp skin exposed. Pour any juices that accumulated on the plate over the top. (If your skillet won’t hold it all, transfer to a buttered shallow baking dish that can hold the chicken in a single layer.)

Transfer the skillet to the oven and roast until an instant-read thermometer inserted into the center of a thigh registers 165°, 20 to 25 minutes.

While the chicken roasts, stir together the cherries and vinegar in a small bowl. Microwave for 30 seconds and then set aside for the cherries to plump.

Remove the skillet from the oven and let stand for at 5 to 10 minutes. Spoon the cherries and any standing liquid over the top. Garnish with more thyme. Serve warm atop the kale salad, if desired.

Sheri uses apples from a nearby orchard to create her One Pan Chicken & Apples recipe. 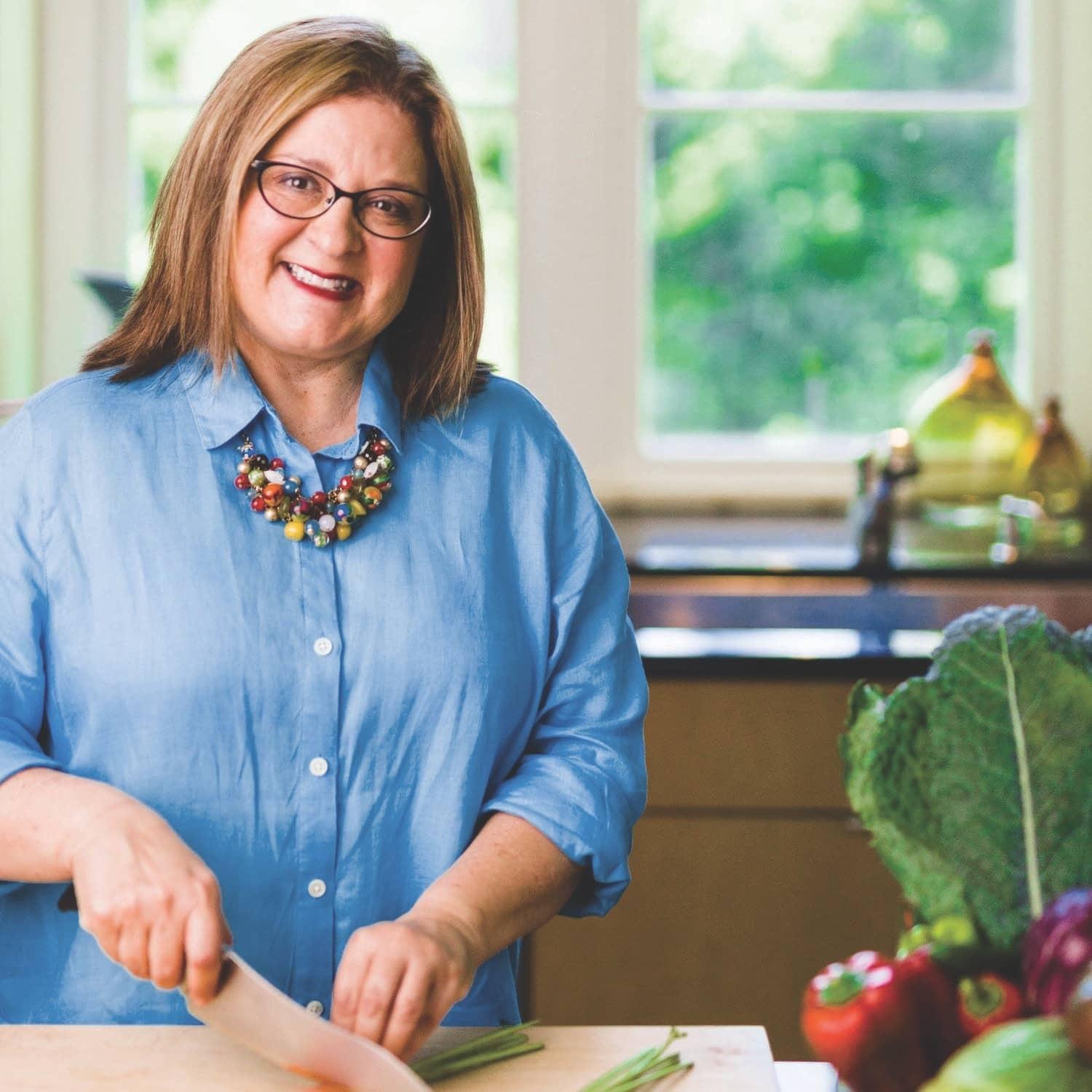 Sheri Castle, award-winning food writer and cooking teacher, is known for melding culinary expertise, storytelling and humor, so she can tell a tale while making a memorable meal. Her creative, well-crafted recipes and practical advice inspire people to cook with confidence and enthusiasm. She's written a tall stack of cookbooks and her work appears in dozens of magazines. In 2019, the Southern Foodways Alliance named Sheri among Twenty Living Legends of Southern Food, calling her The Storyteller.

Sheri says that she's fueled by great ingredients and the endless pursuit of intriguing stories, usually about the role that food plays in our lives, families, communities and culture.

When she steps away from the kitchen or a local farm, Sheri enjoys spending quiet time at her home near Chapel Hill. She hails from the Blue Ridge Mountains of North Carolina.